We’re pretty sure you’ve heard all about the term “microdermabrasion.” But for the sake of people who haven’t, here’s a short explanation.

The Neutrogena system is NOT an everyday, cleansing brush. You use it once in a while on a regular basis to get rid of your face’s dead skin cells through a process called “microdermabrasion.”

Microdermabrasion is a non-invasive cosmetic procedure that uses crystals to remove the upper layer of your facial skin, revealing a youthful glow. It can be done at your favorite spa by a dermatologist (or a trained skin specialist), but with OTC devices such as Neutrogena’s, you can do it yourself at the comforts of your home.

The Secret is in the Neutrogena Microdermabrasion Refills 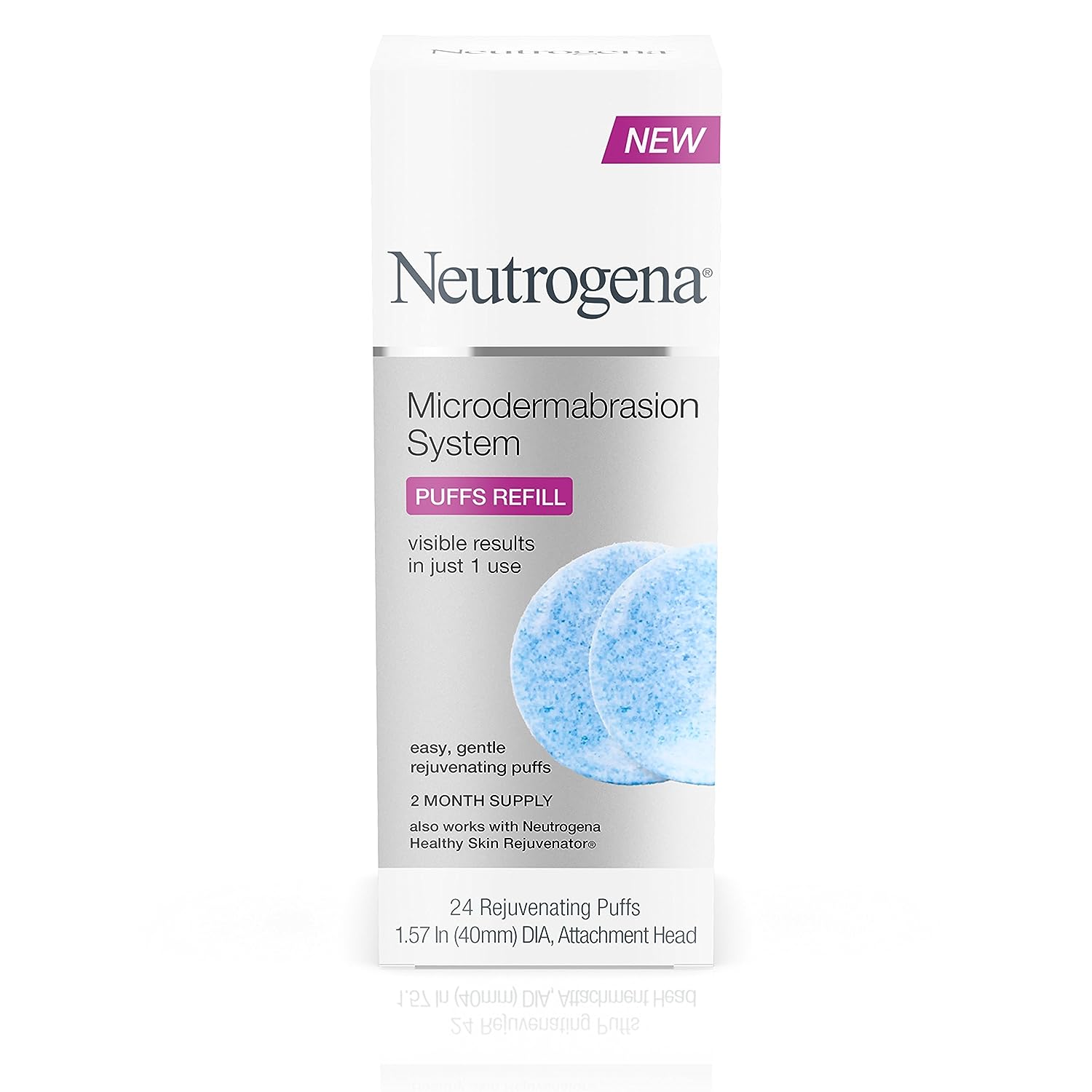 So…how does the Neutrogena exfoliating brush work? The “secret” lies in the rejuvenating puffs.

These puffs are bluish, circular pads that need to be attached to the system applicator. As advertised, these pads are “pre-dosed with ultra-fine crystals and mild purifiers.” They act as a gentle sandpaper that “provides the perfect amount of exfoliation.”

Also, they contain glycerin which helps retain your skin’s moisture.

When you receive your Neutrogena microdermabrasion home kit, expect to be given 12 puffs for free.

According to the company, these should cover your exfoliating needs for one month, provided you use the system at most 3 times per week. In actuality, though, the 12-puff supply can last more than a month as some users exfoliate only once a week.

But when the rejuvenating puffs are gone, you can always buy a refill. Unlike many brands of facial brushes that don’t have replacement brush heads, Neutrogena microdermabrasion refills are always available. 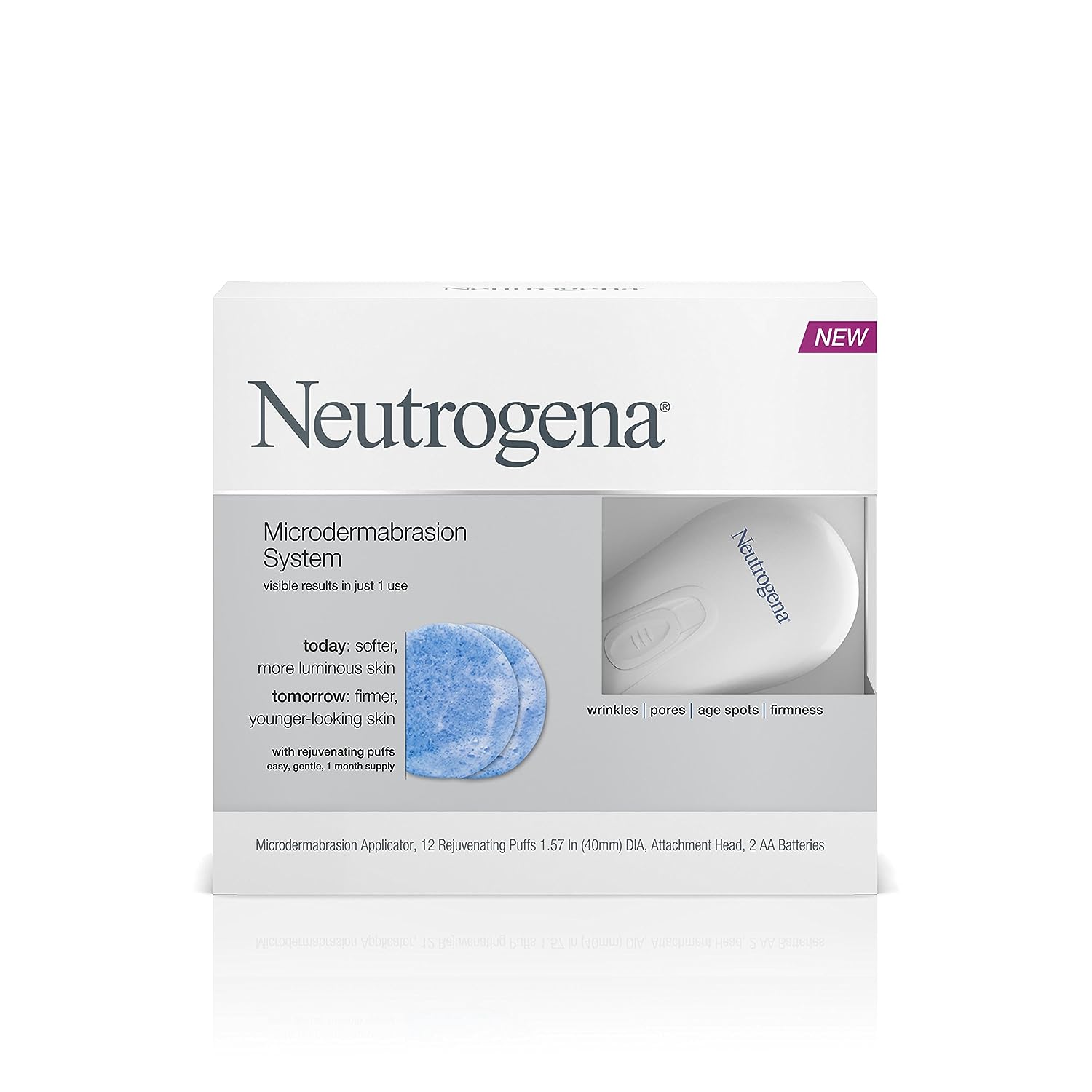 Does the Neutrogena microdermabrasion system work? The short answer is YES.

Several consumers mentioned that even after one use, they noticed how soft and smooth their skin had become. This Youtube beauty vlogger has even said that her newly cleansed facial skin feels like a “baby’s.”

After 5 uses, this Youtuber said she has seen improvements in her skin, especially the dark areas and lines on her face, which became lighter and reduced. In conjunction with other products, she has seen “dramatic results.” Her advice to other consumers to reap the same benefits? Be patient and be consistent.

What else are customers saying?

The general consensus is that with continued and proper use, the Neutrogena microdermabrasion system has helped improve the skin and deal with the following skin problems:

Aside from that, here are other benefits that were mentioned.

– The pads can be abrasive for people with sensitive skin. But the low setting may fix this problem.
– Do not over-do or over-use this microdermabrasion kit. Once a week is okay.
– Don’t over-wet the pads. They may get into your eyes, which can sting.

In another post, we did a Neutrogena microdermabrasion system vs Olay comparison, and we recommended the former.

In this section, we would like to provide our thoughts on the Neutrogena vs Clarisonic battle.

In reality, both of these products are way different. Neutrogena is a microdermabrasion system, while Clarisonic is, for the most part, a cleansing system even though it also sells brush heads whose purpose is to exfoliate.

That said, if you’re looking for an everyday cleansing brush, note that Clarisonic is still on top of our list of the best cleansing system available today. We also suggest that you try the TAO Clean Aura.

Once in a while, you need to exfoliate your face’s dead skin cells to reveal younger-looking skin. To do that, you’ll need the best microdermabrasion brush, and we’re recommending Neutrogena.

In short, buy them both. Use Clarisonic everyday, and exfoliate with the Neutrogena every once in a while.

Face Advantage is a participant in the Amazon Services LLC Associates Program, an affiliate advertising program designed to provide a means for sites to earn advertising fees by advertising and linking to Amazon.com. Also, certain content that appears on this site comes from Amazon Services LLC. This content is provided “as is” and is subject to change or removal at any time.